Trademark law says they must be used continuously to be enforceable. If you stop using them, they are lost. This also means you should have evidence to prove use of your trademark. If your use is challenged, you will have to prove that you’ve been using your trademark, and you need the correct evidence to keep your trademark protected.

This just happened to McDonalds in Europe. Even though they were using the “Big Mac” trademark, they didn’t have the correct evidence to prove that they had continuously used that trademark for the previous five years, and they lost their European registration. A truly shocking result. 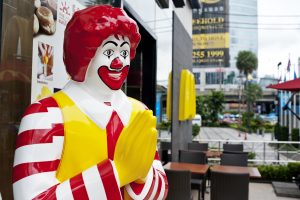 They asserted their “Big Mac” trademark against a competing restaurant chain: “Supermac.” They wanted to stop Supermac from opening restaurants in Europe. Supermac asked the European Trademark Office to cancel the Big Mac trademark for non-use. To avoid this, McDonalds needed to prove that they had continuously used their trademark for the previous five years. They had used it, but they couldn’t prove it.

This has led to many problems, like Burger King Sweden advertising “like the Big Mac, but actually bigger.” Ouch!

In the United States, Federal trademark registrations require a declaration of use or excusable non-use between the fifth and sixth years, and every ten years after registration. This declaration is a statement under oath, and on penalty of perjury, that you are using the trademark.

A specimen showing use in each class of the registration is required to be filed with the declaration. But, these can be tricky, particularly when your use is on the Internet. For example, with product trademarks, the USPTO will not accept use if it’s a mere advertisement. The consumer has to be able to purchase the goods or services on your site.

USPTO Finds 50% of Trademarks not Used

Many registrations have more than one product or service listed per class. A 2012 USPTO survey of 500 randomly chosen trademarks showed that over 50% were not used, even though declarations of use had been filed.

In November 2017, the USPTO instituted the Post Registration Proof of Use Audit Program to, “promote the accuracy and integrity of the trademark register.” Now, all registrants who file a declaration of use may be subject to an audit if the registration includes either:

If selected, you have to prove use for two additional goods or services per each class. Failure to respond to the Office Action will result in cancellation of your registration in its entirety.

Proof of use is evidence that clearly shows how you are using your mark in commerce on the identified goods or in connection with the services in your registration. The USPTO gives examples.

Your trademarks could be your most valuable asset. Proper use is critical and having the evidence to someday prove that use is a must. Additionally, with Federal Registrations, careful identification of the goods or services is critical to valuable trademark registration. You certainly don’t want your trademarks going the way of the Big Mac. Frankly, you should seek the guidance of trademark counsel in this treacherous area of IP law.