Can You Fix Without Infringing?

Can You Fix Without Infringing?

Depends how much needs fixing!

You’ve purchased a product that is patented. It’s stopped working and needs to be fixed. Can you fix it without infringing the patent? That depends on how much fixing is needed.

The question is part of the doctrine of patent exhaustion which terminates all patent rights at the authorized sale of a patented item. When you purchase a patented product, the patent owner loses all patent rights to it. Included within this doctrine is the right to repair the product to preserve its useful life, and to keep it functioning properly. But you can’t reconstruct it, you can’t fix it to the extent that you create a new product.  That would be patent infringement.

Unfortunately, there’s no bright line test to determine when you’ve crossed the line from repairing to reconstructing. 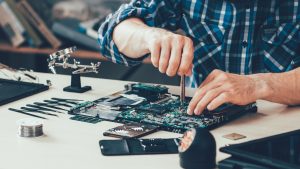 The leading case on repair versus reconstruction is Aro Manufacturing Co. v. Convertible Top Replacement Co., (CTR).  CTR had rights to a patent on a convertible top, including the fabric and associated metal support structure. The patent claims were a combination of the fabric material and the metal structure. Aro Mfg. sold replacement fabric designed to fit the metal support. So CTR sued Aro.

The District Court found that selling the replacement fabric was reconstruction and the Appeals Court agreed. The Supreme Court disagreed, and held it was repair.

Mere replacement of individual unpatented parts, one at a time, whether of the same part repeatedly or different parts successively, is no more than the lawful right of the owner to repair his property. Measured by this test, the replacement of the fabric involved in this case must be characterized as permissible “repair,” not “reconstruction.”

The Supreme Court made it clear that this applies to parts even if they are essential to the patent, have a long life, and are expensive to replace. Regardless of their importance, their replacement is not reconstruction.

The court went on to explain that reconstruction is to “in fact make a new article,” after the entity, viewed as a whole, has become spent.

The critical word is “spent.” The patented product must be spent in order for the repair to qualify as a reconstruction. Since the metal support structure wasn’t spent, the patented entity wasn’t spent, and replacement of the fabric is merely repair.

A second Supreme Court decision in this dispute, gives us a note of caution. The question in ARO II was whether sales of fabric tops by ARO to Ford, who was not authorized to use the patented convertible top, would be infringement. The Court held that such sales were infringement because patent exhaustion requires an authorized use. Since Ford wasn’t authorized, the repair doctrine wasn’t applicable. ARO was found guilty of infringement for the tops sold to Ford. If you intend to repair, make sure the owner purchased the product from the patent holder.

An example of reconstruction was the fixing of a drill with a unique tip geometry. The tip was made of carbide and brazed onto the shank. Sandvik had patents on the drill and sued E.J. Company for fixing the drills by replacing the carbide tip. The tips were routinely resharpened, but would reach a point where they were worn down too far to be sharpened. E.J. would then replace the tips.

The District Court held that the retipping was permissible repair. The Appeals Court reversed, and held that it was reconstruction. The court focused on the drill tip, not being the type that is replaced periodically, was not manufactured to be a replaceable part.  It was not intended or expected to have a life of temporary duration in comparison to the drill shank, and the tip was not attached to the shank in a manner to be easily detachable. The court felt that the drill was spent when the tip couldn’t be resharpened.

Frankly, this holding is difficult to understand in view of the Supreme Court’s statements that repair applies, even though parts are essential to the patent, have a long life, and are expensive to replace.

These two cases illustrate the lack of clarity when it comes to repair and replace.

If you’re repairing patented products, give me a call and let’s discuss.