The US Postal Service learned this the hard way, twice. In 2003, the Postal Service released the Korean War forever stamp. They used a copyrighted photo taken by John Alli showing the Korean War Memorial statues covered in snow. He visited the monument early one Sunday morning after a heavy snow and took the photo. The Post Office paid a license fee to Mr. Alli for its use, but the Post Office still got sued by the sculptor, Frank Gaylord. He didn’t give permission to use his sculptures on the stamp. A classic case of Russian Doll copyright infringement. The Post Office had to pay Mr. Gaylord $685,000. 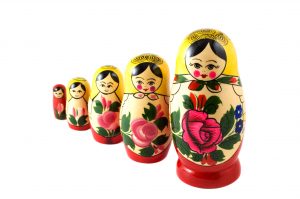 Russian Doll infringement can happen in common business advertising. General Motors learned this when they launched an ad campaign for Cadillac. The ad used a picture of a Cadillac taken on the top floor of a parking garage in Detroit. Unfortunately for GM, there was graffiti on a wall next to the car. The graffiti was painted by Andrian Falkner, also known as SMASH 137. The graffiti was protected by copyright. Falkner sued General Motors for infringement. GM argued that they didn’t do anything wrong since photos of buildings are permitted if they’re visible from a public place. Their argument is correct with respect to buildings, but the court found that the graffiti wasn’t part of the building, but a separate protected piece of art on the building.

GM settled with the artist.

Mercedes Benz did the same thing in 2018.  They photographed their G 500 in front of an Eastern Market building in Detroit that had graffiti on the wall. They used the picture in social media advertising. The graffiti was painted by four artists, Daniel Bombardier, Maxx Gramajo, James Lewis, and Jeff Soto. They objected to the use of their art. Mercedes disagreed, and filed suit, asking a Federal Court to declare that they hadn’t done anything wrong. They used the same argument that had GM used. The court in Detroit ruled the same way as the California court. Mercedes Benz settled the lawsuit.

Another example is presently in a Federal Court in Massachusetts. Leah Bassett rented her Martha’s Vineyard home to Joshua Spafford. He was associated with Mile High Media. They used the home to shoot several adult videos. The homeowner was upset. She got her revenge under copyright law.

Ms. Bassett is an artist, and had her own original artwork on the walls, which appeared in many of the video scenes. The court found copyright infringement. She has asked the jury to award her all profits from all the movies in which her artwork appears. The decision on the damage amount is still pending.

Copyright infringement can be costly. Damages can be the copyright owner’s actual damages, and any additional profits of the infringer, or statutory damages. Statutory damages are available if a work is timely registered. These damages range from $750 to $30,000 per infringement, up to $150,000 for willful infringement.

To avoid Russian Doll infringement, you must be aware of what’s in the background of your photos or videos. Copyright protects the expression of an idea in tangible form, such as paintings, sculptures, photos, music, etc. These can inadvertently appear in your work.  Be aware and take appropriate action. You can avoid incorporating potentially infringing material in your work. You can also reach out to the copyright owner and ask for permission to use the work, which may require a license. The consequences of not taking action can be costly.