“THE” Trademark is Now Owned by Ohio State

Ohio State University recently registered the word “THE” as its trademark.

Ohio State has registered the word “the” with the United States Patent and Trademark Office. Everyone I have talked to about this has the same reaction. Can you register a common word? Of course, you can, the best example is Apple for computers. A common word, owned by Apple, Inc. and reportedly worth billions of dollars. In fact, one of the strongest categories of trademarks are arbitrary trademarks, which are common words used uncommonly, like Apple for computers, or Amazon for online sales instead of the Amazon River.

But some respond, “the” is one of the three main articles in English grammar. The other two are “a” and “an.” As reported by Thoughtco, “the” is the most commonly used word in the English language.  It’s used about every 16 words. So, people ask: will we have to pay Ohio State to use “the”? Will the University of Michigan have to change its stadium name from The Big House to Big House.

Of course not. We can still buy apples, make apple pie and drink appletinis, even though Apple Inc. registered Apple as a trademark. Trademark protection extends only to the products and services on which the trademark is used. Ohio State registered “the” for clothing, namely T shirts, baseball caps and hats sold through channels customary to the field of sports and collegiate athletics. 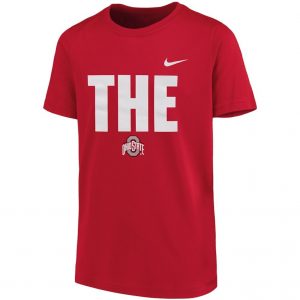 Ohio State isn’t alone in filing and getting registration for the trademark “the” for clothing. New York fashion designer Marc Jacobs filed for trademark protection of “the” on May 6th, 2019, just over three months before Ohio State filed its trademark application. This gave Marc Jacobs what is known as priority in the United States Trademark Office. Priority is important when two registrants fight over who gets registration. Mark Jacobs fought Ohio State over who would get to register “the,” and opposed Ohio State’s registration. An opposition is a proceeding before the Patent and Trademark Office to have them determine who gets the registration.

Having priority gives Marc Jacobs important advantages in an opposition. That’s why you want to file for trademark protection quickly and not put off that decision. In fact, Marc Jacobs new the importance of filing first, and filed before they even used their trademark. This is called an intent-to-use application, and it’s a good strategy to get your trademark application on file as early as possible. You don’t have to wait to use your trademark to get the process started.

Ohio State filed an actual use registration alleging use in August 2005. Even though they waited 17 years to file for federal trademark registration, never a good idea, they still were able to allege use back to 2005. This is possible in the United States because trademark rights begin as soon as you use your trademark. This shifted the advantage to Ohio State in the opposition because whoever uses a mark first usually wins the opposition proceedings.

But why fight when you can settle. This is called a consent agreement. Mark Jacobs and Ohio State University consented to have each of their trademarks registered. They were both trying to register for clothes, but the clothes were a different, and they changed the channels of trade in their applications. Marc Jacobs limited their application to the sale in channels of trade customary to the field of contemporary fashion, and Ohio State through channels customary to the field of sports and collegiate athletics. Both trademarks were then registered by the USPTO.

Surprisingly, these two are not the only companies to register “the.”  “The” was first registered as a trademark on February 24, 1987, for computers by Thompson, Harriman and Edwards computer products. It has also been registered for refrigerators, educational services and publications, cell phones, knee and elbow pads, and bicycle and motorcycle helmets and goggles. There are also several registrations for “the” in different letter formats and with various designs.

Trademarks are an important and valuable business asset. Sometimes your most valuable asset. Registration with the USPTO makes them even more valuable. If you’re in business, you have at least one trademark. Don’t wait to take advantage of the benefits of registration. The sooner you act, the better. Also don’t assume that words, symbols, logos, etc. are not trademarks, they may be; just as “the” is a trademark.

If you find all of this a bit confusing, give me a call at 248-318-7015, or e-mail me at bill@ipguy.com to talk about your trademarks, and what you can do to protect them.